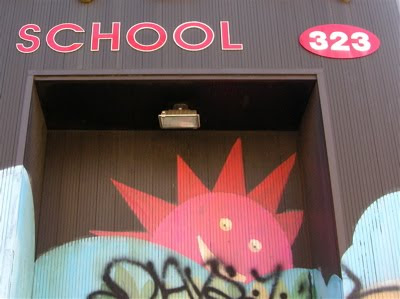 Chinatown, NYC, 2009
A few years back, I came across this freaky sun painted on a Chinatown day care center, and I've been having trippy nightmares ever since. Those of you who were around for the first round of &7 may remember this maniacal little creature, which was featured for 2009's #323. Creepy it may have been, but when I went back a few months ago to pay it a visit, I found myself confronted with a very different scene indeed. No city is immune to change, and this is no exception. Have a look at what I found: 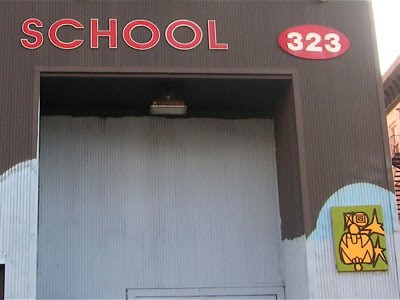 Chinatown, NYC, 2010
Sanitized, sterilized (except for that strange green and yellow glyph that appeared among the clouds), and stripped of its sun, here is all that's left to the mural. I had to give it a moment of silence.
Posted by Therese Cox at 12:00 AM

Ohhhhhh, this makes me sad. That sun had a certain appeal to it in a hallucinogenics-for-kids kind of way.

Hallucinogenics for Kids. Yeah, that's pretty much been dropped from the curriculum.