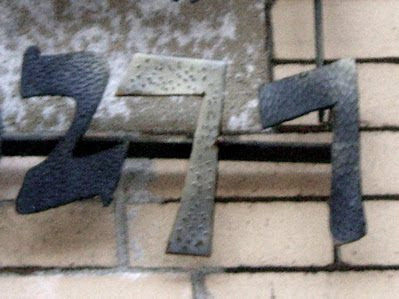 Gowanus, Brooklyn
I had a bad math flashback today.
I should point out that, for someone who's ostensibly obsessed with numbers, I suffer from serious mathophobia. Algebra eluded me, Pythagoras puzzled, pre-calc drove me half batty, and after a severe bout of trigonometry, math and I shook hands and respectfully parted ways. That is, until we were unexpectedly reacquainted in that year, fresh out of grad school, when I hoodwinked the staff of a well-known SAT test prep company into hiring me as both a verbal and a math instructor for large numbers of high school students who surely could wrangle a parabola with far more aplomb than their fearful leader ever could. (Please don't tell their parents.)
They say we teach what we most need to learn. But that was giving me way too much credit. I didn't teach math so much as memorize lines, as one would a play. (My interior monologue: Now here I'll say, "Turn to page 89 and look at question 3." Then I'll say, "We can see the absolute value of x is...") But should a student pose a question from the homework or one from a practice test I'd never before clapped eyes on? Not a chance. I was sunk.
Each Saturday morning, I'd rise at six in the morning to take the hour and a half subway ride up to the Bronx, caffeinating heavily and valiantly dispelling my SAT prep wisdom to under-served populations like thousands of do-gooders before me. I made slightly more than minimum wage but far less than I felt I deserved, considering my sizable student debt; still, as the tireless pterodactyl in the Flintstones cartoon often croaked, punching Fred's time card at the quarry, "It's a living."
With ease and skill I whisked my half-sleeping students through the verbal portion of the lesson. But each morning as the verbal portion of class switched cruelly to an hour and a half of straight-up, no-holds-barred mathematics, I would sweat bullets. I went to great lengths to avoid the (quite common) phenomenon of a student asking me a question where I hadn't pre-packaged my reply, either rapidly changing the subject by saying that in the interests of time, we had to jump ahead to the next question and/or using the time-honored pedagogical game of dodgeball: "Well, what do YOU think the next step is?" Or: "Think it through. I'm not going to just GIVE you the answer, you know." I would punctuate this proclamation with an imperious glare and a swift flick of the page, and thus would I put this or that particular nightmare off -- at least until the next class.
You see, my escape was only temporary. My students' practice tests were multiplying, the math section definitely wasn't going away, and my nightmare of looking like an utter fool before a group of bloodthirsty teenagers seemed doomed to recur with each new class no matter what diversionary tactics I tried. I knew eventually the issue would catch up with me unless something changed. I had only one choice: I would have to become adept in my most hated subject or die trying.
I tried to learn the math. I did. I scrunched my forehead in concentration over desks and filled practice tests with meaningless scribbles in hopes that it would somehow all click if I kept at it long enough. On warm weekend days, I cloistered my sorry self in my kitchen with a scratch pad and collection of number two pencils, wrestling with arithmetic while others were off riding bikes or drinking in my favorite bars. I took four-hour practice tests and at the end, felt like that guy in the urban legend who, in the middle of an exam, drove pencils through his ears or nose or whatever in sheer desperation. I even consulted a math tutor myself, so great was my need.
Nothing helped.
The anxiety of prepping for my classes wore down my nerves faster than the rubber on a NASCAR tire, and when the College Board announced they were making the math section on the SAT even harder, I quit that gig faster than you could say solve for x. Now I teach college level English, a language I'm somewhat more familiar with, and I'm happy to report that while the stacks of papers to grade are higher, the cold sweats have stopped.
My math flashback was brought on today by a rather harmless bit of LOLing from a student in my English composition course, responding to my open-ended "Do you have any questions for me?" query-in-writing that I do midway through every semester. Generally, I will get students asking me English-y things like, "How is my writing so far?" or "I really liked 'Third World Driving Hints and Tips,' is there anything else you can recommend I read?" I do give Get Out of Jail Free cards for those devoid of curiosity, assuring my chickadees that if they've answered the first five guided questions fully, they can leave the last question blank.
I was at the very end of the day's stack when I came across this scrawled under the heading "Do you have any questions for me?":

If a train leaves Pittsburgh going 20 mph for 60 miles then excels to 70 mph for the remainder of the trip, how long will it take that train to reach Toronto?

I gave the student a check for doing the assignment, a joke-acknowledging emoticon in the margin, and while I can't award LOL points when calculating midterm grades, I sure did appreciate the chuckle -- after my heart stopped palpitating in almighty fear.
Posting numbers is so much easier than solving for them.
Posted by Therese Cox at 12:00 AM

Ohhhh, I really enjoyed reading this. I can just picture you at the kitchen table, scribbling manically (into a pretty notebook, of course).

One of my favorite professors at NYU said that she thought physics and higher mathematics were beautiful-- she loved the way the equations looked, all scratched out in white chalk. I thought this might become a portal- an entrance into new understanding for me.

Years later, I can still appreciate the aesthetic of the equations, as pointed out to me by my professor. But entryway? Understanding? Mathematical prowess? I'm none the wiser.

Just wanted to say Hi and thanks for dropping by... liked your comment. So you are a modern day hunter gatherer ? Great notion, do you suppose it could be an international tribe ? Could I be at least a distant honorary member ? I think I'm one too... and I definitely like numbers on architecture, which you can see a few of in past posts... I'll come back when I have some spare time to look around more here in the hunter gatherer cave...
:-)

It's a trick question! There is no direct train from Pittsburgh to Toronto. However, taking the crow-flies distance, the answer is 5 hrs 21 minutes- or thereabouts.

Now: can anyone calculate the crow-flies distance? :D

I have a friend who once blagged her way into a secretarial job by saying - falsely - that she had good shorthand. To cover her lie, she used to take a Dictaphone into highly confidential board meetings, then transcribe the notes in the bathroom at lunchtime. I don't think she was ever rumbled.

Jackie - On the contrary. No pretty notebooks were involved, sadly. Just that cheap-ass recycled-material test booklet paper that just made me want to roll it up and smoke it.

Owen - If there is indeed such a tribe, I'd say we're both in it. Thanks for visiting my site, too. More fun to come, I'm certain.

Robt - I love having a transport planner for a friend. (What do you mean, is there no INTERCONNECTOR between Pittsburgh and Toronto?)

It has always concerned me that there is only one math in America whereas we have maths, plural, on this side of the pond.
I think there is huge distinction between numbers and maths, as between the figurative and the abstract. An analogy with painting isn't too wide of the mark I think, with frames of refererence that are respectively quantitative or representational.
Numbers I can count. Letters are for making words. And pi is something you eat with an e.

Conan - I've always wondered if the difference between math and maths was merely linguistic or, you know, all philosophical n' stuff. I appreciate the insight. Still, one math is enough trouble for me.