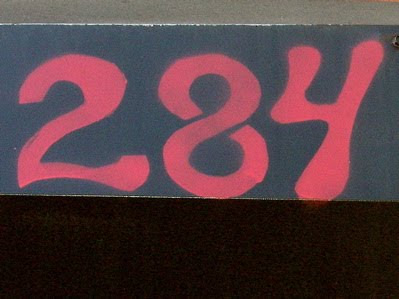 Red Hook Lobster Pound, Brooklyn
Here's a mouth-watering number, and it's got nothing to do with the font. #284 Van Brunt Street is home to the Red Hook Lobster Pound, the jewel in my neighborhood's claw.
Now that the weather's getting crappier rainier colder warmer, my hankering for Red Hook wandering has been awakened. Maybe it's the fact that I can practice my tin whistle on an abandoned pier to the annoyance of none but the seagulls. Maybe it's trad night at Rocky Sullivan's. Possibly it's because there are few things I love more than cycling through urban maritime dereliction. But who am I fooling? It's the lobster rolls, plain and simple, best consumed on a partly sunny afternoon sitting in the grass near Valentino Pier. From there, you can eat your buttery snack and gaze out at the Statue of Liberty while the New York Water Taxi chugs past, ferrying loads of Swedish furniture-seeking passengers to that blue and yellow Mecca on yonder horizon.
Swedish design, Maine lobster, served up Connecticut style, in Red Hook, Brooklyn: not a bad recipe at all. I think one of the homeless guys on the F train says it best: "It doesn't matter what the food is, I'll eat it: Mexican, Chinese, Polish, American, Jamaican. Ladies and gentlemen, my stomach is like the U.N. building: it's international." 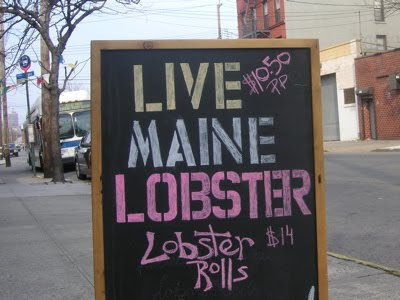 Red Hook Lobster Pound pimpin' its wares. In the background, a rare sighting of the B61 bus, native to the area. This elusive species is rumored to make scheduled stops along Van Brunt Street, though it is best known for its erratic behavior and general knack for speeding off just as one spots it.
Posted by Therese Cox at 12:00 AM

Although you didn't mention him here, I'm guessing you have read and enjoyed David Foster Wallace's piece of that title ?