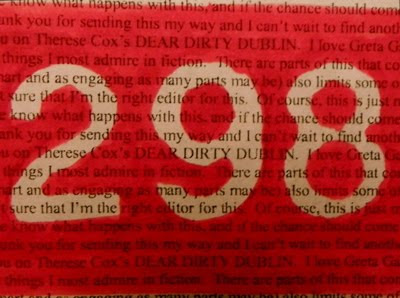 My inbox, Brooklyn
You know what I didn't have for today? A new picture of a #298 for my number line. But I did have this -- a rejection letter for my novel! It was just sitting there in my inbox, doing nothing productive but compounding my feelings of self-doubt, despair, etc. When it could be doing something really useful instead, like making itself into a guerilla art project.
Rejection letters. Every writer who submits work to something other than their flash drive gets them. It's not unique, though I imagine we all have our own ways of dealing with the rejection. I've watched the Dylan Moran video so many times that I probably account for 5% of the 143,498 hits it's gotten. Oh, to have a balcony like that where I could sit and smoke so contemptuously and scenically. And the flugelhorn -- don't forget the flugelhorn!
But I don't have a balcony. I don't have a flugelhorn. And I don't even smoke. All I have is a fire escape, this stack of angst-packed Smiths CDs, and my own breath: breathing in, breathing out, keeping it all together despite the urge -- and the urge is great -- to fall apart. I also have Helvetica stickers. And red pens. Oh, do I have red pens.
I'll admit I've thought about doing something artistic with all the rejection letters I've collected over the years. And yes, I've thought from time to time how it'd be clever and ironic and therapeutic to share my apparent shortcomings to the world in some mildly creative way. Nothing overly nasty. Nothing mean-spirited or bitter. Just, you know -- a healthy grin, a virtual middle finger to stick up to the naysayers who are, after all, only trying to sell books. But I think there was always this catch: My hypothetical project would only be clever and ironic and therapeutic if I did it after I'd already gotten an acceptance letter. That way it would be safe. Then I'd have that all-important distance. I'd come to the table pre-approved, so I could feel good about all that fake self-deprecation.
What can I say? My deadline snuck up on me; I got impatient.
Posted by Therese Cox at 12:00 AM

LOVE, LOVE, LOVE that you did this. It's all kinds of brave & awesome-- and-- gives us other writers out there a sense of strength and solidarity.

Whenever I come across rejection from now til end of time, I will symbolically remember the numbers 298 equate to rejection!

Jac - I forgot all about Post-its and BGH. I shall have to remedy that.

Thanks for the comments. Feelin' less rejecty already.