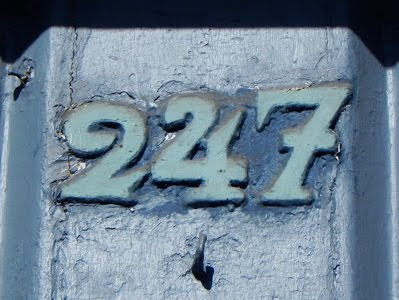 Front Street, Vinegar Hill, Brooklyn
One cold and sunny winter morning, full of caffeine from ReBar, I wandered into Vinegar Hill in search of numbers. I stumbled on this building's gorgeous digits and snapped them right up like the greedy hunter/gatherer I am, then spent the rest of the day idling about glossy-glassy DUMBO, window-shopping and happily mucking about under the watchful eye of NECK FACE's looming tag on Jay Street. But I was curious about the building. I went home and did a search, which was when I stumbled upon this arresting New York Times headline from January 24th, 1884:
HIS HEAD TORN FROM HIS BODY: A HORRIBLE ACCIDENT IN THE EAST RIVER BRIDGE ENGINE ROOM
The full article tells the story of laborer Patrick McBride, who suffered a fatal accident while oiling a machine in the engine room in Prospect Street, Brooklyn. Afterwards, his remains were taken back to his home at 247 Front Street.
While I am no great fan of salacious headlines -- except ones that involve waffles and firearms -- I find myself unable to resist wasting perfectly good brain cells contemplating the hidden histories of the buildings we live in. Who were the people who came before us? What stories would the apartments tell if they could talk? New York is a great city for re-invention, which is part of the appeal. Who you were isn't nearly as important as who you are or, even better, who you might become. You want to get away from the past? Come to New York. Sign a lease and move right in. Re-paint the walls. Move in your new IKEA Krapt furniture, burn some sage, order a pizza, yadda yadda yadda. You'll probably never know the tenants who came before you and in most cases, you wouldn't want to. Isn't that the way it should be?
As a kid, I was obsessed with time capsules. I was in Girl Scouts when I first learned about the phenomenon, which in the case of Illinois Prairie Troop 767 was probably much cooler in theory than in practice. I'm sure those futur-ific folks in 2085 are going to find themselves mighty enriched when they dig up a Pringles can full of friendship bracelets woven out of embroidery thread a hundred years in the dusty past. History at your fingertips. Who are we making these capsules for, anyway? Ourselves, maybe. It's scary to think of being forgotten.
Stories. Scribbles. Time capsules. Lost objects. Cracks in the plaster. Photographs. Articles. Clues. The city is full of them. Most go unheard or unnoticed. But the impulse is still there to tell, to tell. Just in case there's someone on the other end of the tin can telephone who just might be listening.
Posted by Therese Cox at 12:00 AM

Loved reading this. My second grade class made a time capsule-- I remember it so, so clearly-- the march outside to the playground to bury our drawings and letters to future students of the school.

And YES!! A throwback to the Waffle article!!! That thing totally needs to be dug up every now and again.

Jackie - I knew you'd appreciate the waffle throwback. Just don't, you know, actually THROW the waffle. We know the unhappy ending to that story.