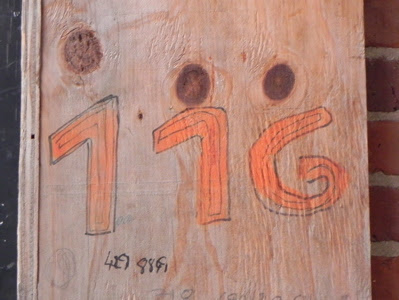 Exhibit A: Upper East Side, NYC 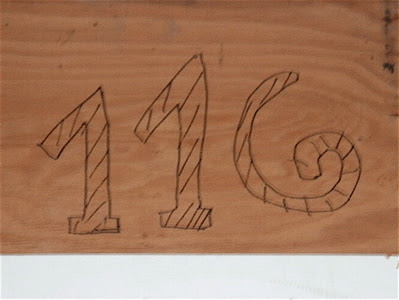 Exhibit B: Upper East Side, NYC
OK, so it's not exactly forensic science here, but I do have an interesting puzzle. Back in December, I came across the first #116 on a scaffold on the Upper East Side. I found it in the East 80's and it's pretty ornate for a Sharpie-and-spray-paint temporary address marking. I liked the splash of bright orange and the weird marker double outline, so I grabbed it.
Then just a few days ago, I was trawling the East 80's again, regretting very much the post-Met museum hot dog and ice cream lunch I'd ingested in my post-museum glaze, when I was stopped in my tracks by another unusual #116. This one was located above the door rather than at eye level, but as a hand-drawn number on a plank of wood, it reminded me very much of the first.
My armchair Holmes says the snakey sixes, unusual in their shape, resemble each other enough to be the work of the same hand. Plus, we don't do much of the serifs-on-top-of-the-ones action here in the States, so I'm suspicious of that similarity too. But I'm curious if you think there's as much similarity as I do. Same artist or pleasing coincidence? Any typographical detectives out there want to tackle this one?
Posted by Therese Cox at 12:00 AM

I'd have thought the 1s and the fact that the numerals are internally lined across rather than the length of the numbers would suggest that it was a different hand...

....unlesss it was a character like Vizzini trying to put folks off the scent...

Conan - Hmm, evidence to the contrary. If there is in fact a crafty 116-maker on the Upper East Side purposefully throwing folks off the scent, then I have indeed met my match.