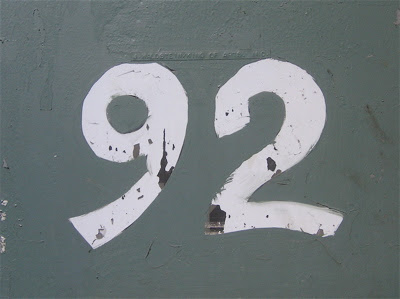 Red Hook, Brooklyn
Some time ago, I happened upon a head-scratcher of a cultural relic: a series of commercials for the German DIY home improvement store, Hornbach, featuring Blixa Bargeld of the experimental German noise band, Einstürzende Neubauten -- a band perhaps best known for making their instruments out of scrap metal and banging them on whatever happened to be laying about. In these ads, Mr. Bargeld, dressed like a walk-in on a Wim Wenders film, his dark hair slicked down, sits at various desks and reads from the Hornbach catalog with aplomb. His manner is so dramatic, his finger pointing so intimidating, and his consonants so violent he might be reading an angry political manifesto. But he isn't. He's describing furniture. If you can imagine, say, Marilyn Manson reading the IKEA catalog out loud, you might be prepared for some of the cognitive dissonance I experienced on first watching.
Then there's the deadpan ending of each thirty-second commercial, which involves him invoking a sort of cowboy's yodel, German expressionist style. I really don't know what to make of it.
My favorite of these videos -- though it's hard to pick just one -- is the one where Blixa, reading from the Hornbach catalog, is worked up in a fever pitch as he utters the words grünlich grau, which simply translate as "greenish gray." I happen to like this color in real life, so the sound byte from the commercial always goes off in my head each time I see it. Today's number, though a little more grau than grünlich, is a good example. If you want to see the commercial in full dramatic action, I highly recommend thirty seconds of your time to watch this clip. You will never see greenish gray in the same way again.

I've been waiting for this 92 to roll around, if only because every time I pass it in Red Hook on my way to Rocky Sullivan's, I think again of Blixa. And I hear his German growl spitting out each fierce syllable like he could cut your throat with it. And while it doesn't make me want to buy any home improvement items, it does make me smile.
Posted by Therese Cox at 12:00 AM

"spitting out each fierce syllable like he could cut your throat with it." Great image.

Ya, das ist true. Hitler comes to mind when I think of someone speaking German.

Pierre - If you listen to Kraftwerk sing about pocket calculators in German long enough, that ought to help you get over it.

No one does numbers like you do... if the police caught on they might arrest you for running a numbers game. I won't tell.

Owen - Heh. Glad there's no amendment against the right to bear numbers.