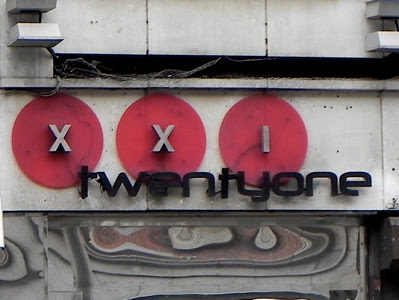 D'Olier Street, Dublin
While I have slowly surrendered some of my Luddite ways over the past few years, I still like to bemoan what I call the YouTube-ization of everyday life. Very few things in life are worth filming, and still fewer worth re-watching. This does not stop legions of so-called smartphone-wielding urbanites from whipping out their cameras to capture even slightly unusual events with the express intent of posting the clip online as quickly as possible: some dude breakdancing in Grand Central Station, or else the breathtaking magical holiday subway car -- an antique subway train fully restored to its past glory -- that unexpectedly pulled up today at the West 4th Street stop to take me on a rickety, surreal short trip back through time before dropping me off, bewildered, at 2nd Avenue. (Intrigued, New Yorkers? You can find out when to catch the vintage train here.)
Each to one's own, but I can't help pity these video vultures a bit. It's like they're ordering the fast food version of important moments: quality is of no object, only quickness, only grabbiness -- things must be captured at all cost. There's nothing worse than going to a great show where your view of the stage is obstructed by dozens of eager hands wielding so-called smart phones over their heads, the very LIVE show you are trying to watch getting its soul collectively sucked up by so many people out to document the moment. Recently, I reveled in watching the comic John Oliver cheerfully berate an audience member who was filming Oliver's stand-up routine on his iPhone. "What?" Oliver demanded, interrupting his routine to face the bright blue glowing light in the audience. "Is now not good enough for you?"
I confess I've been tempted to do the same, particularly when it comes to places I love. There are few things that make me happier than wandering the streets of Dublin, and once or twice I've been so taken with the view from the quays that I've filmed the length of the Liffey and the parade of blurry strangers tromping over the Ha'Penny Bridge, just so I could take a piece of the experience home with me. The re-watching, alas, is a poor copy of the real moment, and I find that my sketches and notes, with all their messiness and flaws, capture the feel of city better. (And nothing beats the moment itself.)
But I have to change my view on this a little after finding something cool on the interwebz: an interactive YouTube clip that takes you on a drive through the streets of Dublin. Driving in Dublin is not something I have any particular wish to do (give me feet or bicycle wheels any day), so maybe that's the salvation: I have no romantic notions to be quashed. Anyway, I found a neat little clip that takes you past D'Olier Street, where you can just barely make out the location of today's number (on your far left at :29). To my delight, the meandering route then snakes around to College Green, where you can see the bookstore where I used to work at the end of the street at 1:06. There's a whole bunch of videos in the series, and as you're watching you can click on the screen and go to other clips, essentially taking yourself on a mini drive through the dear dirty city.
Inevitably, more than five minutes of this sort of play would probably lead me into a depression (poor copies make me long for the real thing), but I still think it's a pretty cool concept. Curious? Go ahead and take the drive yourself.
Posted by Therese Cox at 12:00 AM

I'm inexplicably fascinated by that.

makes me happy to read your writing!

Did you work at Bks Ups?

Some Randomer - That link is fantastic. Thanks for posting it. Completely bizarre to see cars on Grafton Street. (And sad that McDonald's was my first orienting landmark.)

Radge - Weird and wonderful, isn't it? You might check out Randomer's vimeo link if you haven't already -- a Dublin drive, circa 1982. Check out those buses!

Jackie - Thanks, m'dear. I hope I haven't lost my chops.

Conan - Indeed I did! Love that place.

Now if only they would pedestrianize College Green. That intersection is like the world's worst game of Frogger.