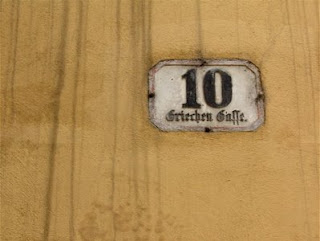 The fading black Gothic lettering, the archaic German s that looks like an f, the wall dripping with decaying shades of ochre: what's not to love?  Many of the number plates in Vienna have a uniformity.  Once I noticed this, I found that the surroundings of each number became more interesting to look at.  Generally, the architectural ornament surrounding each number is carefully considered -- as is the case with this one -- and Vienna certainly has more than its fair share of stately, graceful ornament.  But I had more fun hunting for accidental beauty, like this number 10.
Posted by Therese Cox at 12:00 AM

This brings to mind Nazi films.