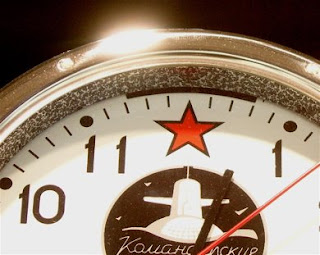 
I spotted this clock amidst the organized chaos of an antique shop window in Vienna.  (Yes, the 11 has company, but who's counting?)  I didn't know what it was, apart from an interesting timepiece.  It was my Uncle Jack, with his knowledge of all things nautical, who instantly identified the figure at the center inside the black circle as a submarine and not, as I had thought, Zorro.  The Cyrillic script at the bottom of the picture confirmed his suspicion, and over time, I slowly ceased seeing a sombrero and started seeing a submarine.
This model, much beloved among submarine clocks, was produced by Vostok, who manufactured these for the Red Navy.  The cold war once made the exporting & importing of such clocks illegal, but now they are readily available, and quite defrosted.  Vostok also makes quite nice wristwatches (featuring watches of "brutal design" and "constant quality and reliability") -- for that special Soviet military metalware collector in your life.
Posted by Therese Cox at 12:00 AM

I wish more things in my life featured brutal design. Then they'd hold up to my brutal treatment. This is gorgeous, btw.

Also, and unrelatedly: I can has blog too!

I went to Ray's blog and now understand his comment. For the reasons he liked "11" I don't. It is rather gaudy to me as compared to the others. But to each his own. I especially like 1,3,4,7,9,12 with 7 as my favorite. They are all are rather peaceful.
You could have shown the full face of the clock and been covered for numbers 1 through 11. I'm glad you didn't.

@Pierre: I didn't realize I should market myself with a decoder ring. Thanks for the tip! :)

Oops! Thanks for correcting my copy. I know a Ray but she is Rae.