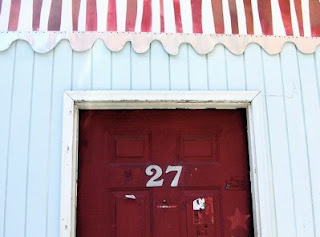 #27, Asheville, North Carolina
Growing up outside Chicago, I was fortunate to have a family that loved to travel. By the age of eighteen, I'd seen close to forty of the fifty states, most of them on road trips in the old blue Econoline van that, according to today's standards, probably violated about nine out of ten child safety laws. Most of the remaining states on my to-do list, for better or worse, fell on the other side of the Mason-Dixon line.
While on tour this summer with Balthrop, Alabama, I got to remedy this situation. A East Coaster by way of the Midwest, I decided it was time I got in touch with my southern side. This meant stomping around in cowboy boots purchased in a bout of exchange-rate hubris one cold day in Montreal and treating every gas station like an anthropological study. I made lists of things (that's what I do) spotted on shelves: fifty varieties of snuff, Backwoods Wild n' Mild grape cigars; fireworks; a humorous booklet called 'Speakin' Suthern the Way it Should Be Spoke". I may not have earned my place in the annals of immersion journalism, but I did eat a lot of crappy pre-packaged foods and I did get to meet some of the friendliest people, especially in that charming little town called Asheville, North Carolina.
Along a short stretch called Carolina Lane you can see the obvious pride many take in making their houses cheery. The brightly painted doors and prominent numbers stand out against what would otherwise have been a lonely little alley. If you like the looks of this 27, just wait 'til you see 37.
In a sad coda to yesterday's post on Scott & Zelda, it was at the Highland Hospital in Asheville that Zelda Sayre Fitzgerald perished in a fire on March 10, 1948. She had been in and out of institutions for the later part of her life and died during a brief visit at the hospital. For many years Zelda had been in the care of Dr. Robert S. Carroll, whose wife, Grace Potter Carroll, used to give voice lessons to Nina Simone.
Posted by Therese Cox at 12:00 AM

My dad has a family plot in Asheville, NC. It's both eerie and lovely. It's a plot that I hope does not develop for some time, however.

I love the faded star on the door, as if someone thought twice about his or her status.

Today's word is mithe (To mince and writhe at the same time, like Peter Murphy does when he dances?)

I'm ready to go back to Asheville. I love that town although it's too small to live in. We're going to the deepest of deep south this tour! Even going to my hometown!

Ray & Bama: yeah, let's only have above ground parties in Asheville. Much, much more fun.

The faded star on the door is great! I'm afraid that the tiny rectangular sticker of Brak on my front door, though carefully left alone during the last paint job by a thoughtful painter, will not leave quite a cool shape.

I struggle with the language and eccentricities of the NE, and am totally baffled (but charmed) by the South.