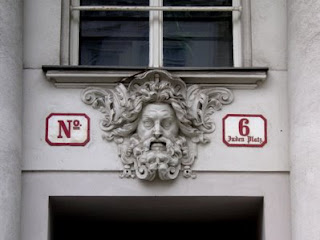 #6, Judenplatz, Vienna
I'm not generally a fan of the grotesque-human-face-as-architectural-ornament thing. Lean gargoyles with sinewy necks and bat wings, sure. But stick a cranky, grimacing Poseidon-like face over a doorway and I feel uneasy. I can't imagine walking past this every day, let alone through the door it protects. There's a passage in John Barth's The End of the Road where Jacob Horner, the rather unappetizing narrator, describes: "My sculpture on the mantel, a heroic plaster head of Laocoön, so annoyed me with his blank-eyed grimace that, had I been the sort of person who did such things, I'd have turned his ugly head to the wall." And yet he doesn't. He may prefer to look away, but for some reason he can't.
There is something redeeming, though, about this one, and I suspect it has to do with the 6. Maybe it's the genteel framing of the symmetrical number plates on either side. Maybe it's the splash of bright red and the "No." abbreviation. Or maybe it's proof of the humanizing effects of good typography. Anyway, I took the picture, and I haven't yet turned it around on my desktop.
Posted by Therese Cox at 12:00 AM

a bit too, like the eyes of Mr. Fitzgerald's Dr. T.J. Eckelburg... "but his eyes, dimmed a little by many paintless days under sun and rain, brood on over the solemn dumping ground."

From being introduced to this blog & recently reading others on blogspot, I've found that it looks easier to use than the one I was using previously (for six years!) So for now, I'm going to try switching over here. (Though I can't promise if it'll stick.) Here's the link:

Symmetry does it for me every time.