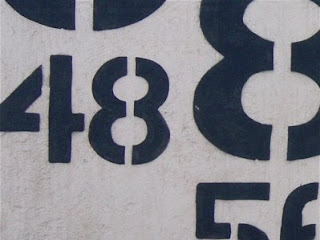 #48, near Széchenyi Bridge, Budapest
Stencils are about as straightforward as can be, but the logic of this wall escaped me when I took the photograph and continues to puzzle me to this day.  A simple white wall stretching alongside the River Danube, it is covered with the numbers "48", "56", and "89".  The sizes vary and the placement of the numbers is jaunty and random, but everywhere you look are these three numbers repeated again and again.  Now maybe I've just been watching too many episodes of The Prisoner, but I couldn't help but feel someone was trying to send me a secret message.  But if there is a code hidden in this image, it remains, as of yet, uncracked.
Posted by Therese Cox at 12:00 AM

Beginning: In 1848, the year of revolutions across Europe, Hungary first became a democracy, briefly. (The Austrians crushed it a year later, and executed the leaders of the democratic revolution). But in 1848, in Hungary...

"A 12 point program for the establishment of a bourgeois democracy is passed. [Comparable to the American Declaration of Independence]
March 17 1848 Pressured by events, Emperor Ferdinand V appoints Count Lajos Batthyany to lead the government. He confirms the laws passed by the Diety; the abolition of feudalism, the constitution of a representative national assembly, freedom of the press, equality of worship and Transylvania's cession to Hungary."


As for 56, the middle... You know, I hope, the situation of Hungary in 1956? It was occupied by the USSR... Background, while I'm at it: The Stalin-backed and highly unpopular Communist regime took power in a Hungary devastated by war, demoralised, and disgusted with itself. (Hungary, dementedly, had fought alongside Hitler, and had its army destroyed on the Eastern Front, and its Jewish population murdered by the Nazis and their Hungarian collaborators.)

So, middle: As for 1956... if you haven't heard of it, here's a good potted history from an Australian website...
http://www.eurekastreet.com.au/article.aspx?aeid=1858

"On 23 October 1956, Budapest students rebelled and issued a manifesto demanding free elections. The Soviets reacted ruthlessly, sending their army into the city. This triggered a general rising and the overthrow of the regime. A reformed communist, Imre Nagy, became Prime Minister. Nagy announced that Hungary would leave the Warsaw Pact and become a neutral state, that all political prisoners would be released and that free elections would be held.

In Moscow, the Soviets viewed these events with horror. Their empire’s legitimacy was at stake with the challenge to the Communist Party’s monopoly of power in Hungary. On 3 November, the Soviets made a new attack on the rebel stronghold of Budapest, using tanks, air-strikes and artillery. Over 2,500 Hungarians were killed in the fighting. When the rebel government was crushed, 200,000 people fled abroad, of whom 14,000 eventually settled in Australia. Over a thousand people, including Imre Nagy, were executed by the vengeful Hungarian Communists. The crushing of Budapest became the model for communist regimes. As Tiananmen Square showed again, years later, only communists who are willing to use tanks to kill their own people, or similar extreme measures, can keep power for any decent period of time."

And end: 1989, the Soviet Union said they would no longer intervene in the internal affairs of the Soviet Bloc countries. Without the threat of tanks, the Communist goverments fell across Eastern Europe. Let me quote Wikipedia on the endgame in Hungary:

"In October 1989, the Communist Party convened its last congress and re-established itself as the Hungarian Socialist Party, which still exists today (see MSZP). In a historic session from October 16 to October 20, the parliament adopted legislation providing for multi-party parliamentary elections and a direct presidential election. The legislation transformed Hungary from a People's Republic into the Republic of Hungary, guaranteed human and civil rights, and created an institutional structure that ensured separation of powers among the judicial, legislative, and executive branches of government. Hungarians suggested that Soviet troops "go home" — an idea first suggested by Viktor Orbán at the re-burying funeral of Imre Nagy."

OK, there you have it. The three key dates in the history of a free and democratic Hungary. History lesson over. Mystery solved. Class dismissed. Hope you weren't too bored...

I knew the answer was out there somewhere, but I never dreamed it would come from the man who stole Will Self's pig. Thanks for the enlightenment about the numbers. I really was curious. And damn, you can hop a fence in a cravat like nobody's business.

Eureka Street is a tool of the Jesuits in Australia.