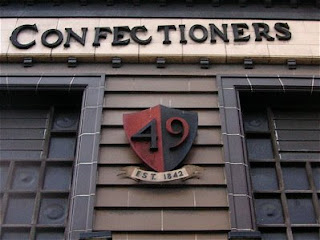 #49, O'Connell Street, Dublin
James Joyce once boasted that if Dublin was ever destroyed, it would be possible to reconstruct the city from the passages of Ulysses. I've always thought that a funny notion since architecture hardly figures into his writing at all. You could trace a line on a map of Leopold Bloom's wanderings on June 16th, 1904 with stunning accuracy. You could even, as Ian Gunn and Clive Hart have done in their wonderfully exhaustive book James Joyce's Dublin: A Topographical Guide to the Dublin of Ulysses, chart the exact movements of every single character from the Wandering Rocks episode down to the minute, from the moment Father Conmee descends the presbytery steps in his thin socks and silk hat (2:55 PM) to the last "salute of Almido Artifoni's sturdy trousers" at 4:00. All of this despite the perils of what Hart calls "readertrap": intentionally misleading devices like hidden crossreferences, linguistic ambiguities, and just plain calling things by the wrong names. Heck, our narrator even stumbles and calls the Grand Canal the Royal Canal. And yet we know that Stephen and Artifoni depart each other's company at, oh, about 2:24. Now I don't know how city planners and architects would potentially deal with "readertrap" in laying out the plans for the New Dublin, but I'm guessing they would have many more pressing issues to tackle in the wake of Joyce's fabled destruction of Dublin than puzzling over passages of Ulysses. Finding a pub, for instance.
As cosmopolitan Dublin grows more and more unrecognizable, getting a feel for the Dublin Joyce describes gets harder and harder, even with some of the buildings still standing. A few years ago at the time of the Bloomsday centenary, Frank McDonald, Environment Editor for the Irish Times, wrote a piece called "In search of the lost city" that reflects on the changes and tracks the histories of the buildings Joyce mentions. Well worth a read. When you realize how much has changed, inevitably so, it's a rare treat to discover a small sign of the Dublin of a hundred years ago.
This 49, located on O'Connell Street between the Liffey and the General Post Office, simply caught my eye for its design. But it also once housed Graham Lemon's, the confectioner that makes an appearance in the very opening lines of the Lestrygonians episode in Ulysses:

Pineapple rock, lemon platt, butter scotch. A sugarsticky girl shovelling scoopfuls of creams for a christian brother. Some school treat. Bad for their tummies. Lozenge and comfit manufacturer to HIs Majesty the King. God. Save. Our. Sitting on his throne, sucking red jujubes white.
A somber Y.M.C.A. young man, watchful among the warm sweet fumes of Graham Lemon's, placed a throwaway in a hand of Mr Bloom.

Unlike Davy Byrne's, Graham Lemon's is no longer operational. But the destitute sign remains, missing a few letters so that the building now reads "E CONFECTIONERS HAL". Just like that precariously hanging "C" in the picture, we'll have to hold on to what we have for as long as we can.
Posted by Therese Cox at 12:00 AM

The precarious C is entrancing. The number less so.