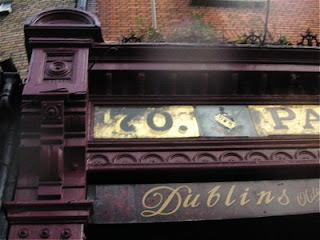 #70, Conway's, Dublin
The authentic Irish pub, like the famous original New York City pizza, is an experience sought far and wide. It beckons to the avid guidebook thumber like a holy grail; it promises, in a very pre-packaged and safe way, to deliver exactly what one expects from it, nothing more and nothing less. To some extent, we're all guilty of this. We go to a place to get a certain experience: a sidewalk cafe in Paris, a glass-blowing factory in Venice, a distillery in Scotland, a brothel hash bar den of iniquity wooden shoe factory in Amsterdam. The experience feels a bit like picking up Value Meal #3 from the drive-thru window, but let's face it: our vacation days are scant and as much as we'd like to linger for months and write uplifting memoirs about eating, praying, and loving, most of us have to cram. This is why we laugh at the person who goes to a McDonald's in Paris. (I was in my twenties! I was broke! There, I've said it.) This is also why the clever advertising people who tell us what we want and why we want it sculpt signs to make life easier for us, placing them in strategic locations throughout cities that say reassuring things like "Dublin's Oldest Pub", "Famous Original Ray's Pizza", "Birthplace of the Blues", or the ponderous "Where the heck is Wall Drug, South Dakota?" which I've seen in places as far away as Holland quite near a wooden shoe factory. We're told where to get the archetypal slice or perfect pint and we go there. Simple, right? Except when it isn't.
Now looking for authenticity in an Irish pub sign that is there solely to claim its authenticity is a fool's errand in the first place. But when I noticed the bold claim "Dublin's Oldest Pub" underneath the 70 of Patrick Conway's on Parnell Street, I paused. The Brazen Head, as far as I knew, had sunk its claws into that singular claim. Indeed, I did a bit of research and it would seem that history sides with the Brazen Head. True, Conway's was established in 1745, which is ancient in New York years, but the Brazen Head was serving the good stuff even before the liquor licenses started in 1635. Then if you want to really stretch it, evidence shows that there was a tavern on the Brazen Head's current site at 20 Bridge Street as far back as the 12th century. Sorry, Conway's, but in my book, the Brazen Head wins.

Back to ye olde 2009. Conway's appears to be closed. It's facing a slew of legal battles and is threatened to be swallowed up forever into the belly of a shiny new shopping center scheme on the site of the old Carlton Cinema. With that fate in mind, we'll forgive them their dodgy "oldest pub" claim. Eulogies for the beloved pub are already being written . But perhaps nothing was quite so alarming as when I found this ill-translated "fact" about Conway's. Readers, pay close attention:

Established since 1745, Conway's is one of the last surviving pubs in Dublin.

And you thought our recession was bad! Here Conway's stands, one of the last surviving pubs in Dublin, and the damn thing's been boarded up for months. I really do need a drink.
Now I've never not gone into a place because it wasn't the oldest pub or the famous original Ray's pizza or whatever. But I do find the modesty refreshing in a place that claims to serve "probably the best coffee in Dublin" or "probably the best pizza in Dublin". Or take Carlsberg (if you must). This, of course, has been "probably the best beer in the world" for as long as I can remember. You can thank Saatchi and Saatchi for the false modesty behind the Carlsberg campaign, but in the others, I see humility and humbleness. I think to myself, I will probably try this someday. I don't expect to see any "probably an authentic Irish pub" or "maybe this is an original Chicago hot dog, but we're not entirely sure" ad campaigns aiming at today's consumers. It's probably for the best.
Posted by Therese Cox at 12:00 AM

loved this post. It made me laugh (more than once).

"Dublin's oldest pub" seems more misleading to me than signs that claim "Fame" or that they're the "best." I'm more apt to believe a sign that says it's the oldest than one that says it's the most famous... because "oldest" is so much more quantifiable...

though you're right... "We're close to being the oldest pub" doesn't quite have the same romantic ring.

lairet- a cave or alcove with dainty embellishments, usually in the form of curtains or flower beds at the entrance

"Ah, Conway's. Sure wasn't that where Michael Collins was arrested and Patrick Pearse was shot by the black-and-tans and where James Joyce and Yeats used to arm wrestle."

"Ah, the White Horse Tavern. Sure wasn't that where Dylan Thomas drank twenty whiskeys, keeled over, and died."

I'd love to see a pub bore/pub lore section on Snopes.com, wouldn't you?

Oh, by the way, it was only eighteen whiskeys. And he died at St. Vincent's.

Excuse me while I get hung up on the grammar, but what is one supposed to make of "Established since 1745"? Establishments that don't know what it means to establish something perhaps should cease to be.

The article only got worse from there, sadly. Bad grammar and confusing logic - and that was just the first sentence. It makes for terrible journalism (not the pub's fault, for the record), but the thought of Dublin suffering a pub shortage was too amusing to resist.

Staff meeting at the bar- "How bout "Oldest pub in Hibernia/Ierne- Caesar first drank here in, mmm, about 44 B.C."
"No, Joyce, Collins, all of that Sien Fein stuff will really pack 'em in", right then.

Thankfully, there was no "first juke joint" still standing- Unless the House of Blues chain decides to build one, but Stuttgart Ark. & the Louisiana State Prison just won't draw people- and that was a mere 100 years past.

An old pub with the cleanest taps in Dublin, Just like the "Green Mill" here in Chicago, "Al Capone's hangout", with decor to match inside- but the building is 40 years old.

If only these marketing people could live a day in the life of those names they promote- I can't see this ending... (T)

Definitely vote for the hand-up-the-back text.