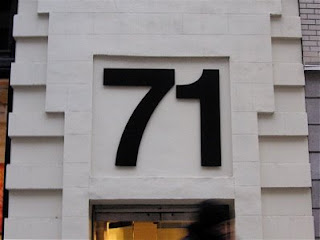 #71, 5th Avenue, NYC
A few months ago, I finally indulged my geekery and saw Gary Hustwit's Helvetica, a documentary about yes, the font. It was one of two feature-length documentaries on my list last year; the other was Man on Wire, the story of French daredevil Phillippe Petit's walk on tightrope between the towers of the World Trade Center. The concept behind Petit's endeavor defied imagination; the notion of the first was radical only because it proposed something even more daring: a long look, in this jump cut culture, at something static and ordinary.
Does anyone else remember watching those public television documentaries as a kid, the ones that would show you how potato chips were manufactured? I can recall being riveted by watching vivid images of crayons whizzing by on a conveyor belt, feeling supremely privileged that I was getting some kind of insider's view of how things were made. For about a week, I couldn't look at a crayon without feeling my head swell with this amazing glut of information. Crayons -- they had this whole other life, this history, this fantastic creation story. When someone asks us to look closely at something very ordinary, whether a box of crayons or a font, it changes how we see the world around us. The pleasure of watching Helvetica comes from this altered perception: how one small thing in our lives can take on greater, global meaning when we stop not just to look, but to see.
The idea to make the film came to Hustwit as was wandering the streets of New York City. And Helvetica is everywhere in New York. It's used on all the subway station signs. And it's hard to miss this oversized black and white #71 on Fifth Avenue. After you see the film, you start noticing Helvetica everywhere: in ad campaigns, on flyers, on book covers. I'd watch it all over again if only for Michael Bierut's syntactically quirky, brilliant rants and Tobias Frere-Jones's allusion to a nightmare about serifs. Also of note: Bierut reviews the film and Frere-Jones discusses his font, Gotham . (In this outtake, you can check out the famed font collector's Mac screen view at 1:20, which is what my iPhoto would look like if my obsession with numbers was even more grandiose.) But one idea that has stayed with me is this one from the influential designer Massimo Vignelli:

The life of a designer is a life of fight, fight against ugliness . . . just like a doctor fights against disease.

What gives the movie its bite is the highly opinionated, often very funny commentary on the uses of typography. Helvetica, a basic, no-frills, modern font, is highly polarizing. After watching it, you may have to ask yourself difficult, existential questions like: am I a serif person or am I sans? Which font, if any, represents you best? And where, as you look around, do you see yourself most in this clustered, overcrowded world?
Posted by Therese Cox at 12:00 AM

Thanks for visiting my blog and the nice comments. Your's is great as well! Will make it a regular part of my rounds...really like your angle and shots.

The 7 and the 1 are not comfortable with their close proximity.dogin