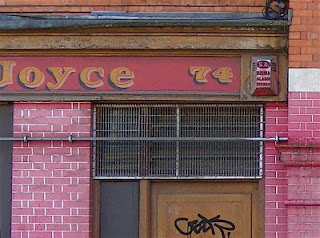 #74, Denmark St, Dublin
In the wake of my recent Lynch & Sons post and subsequent giving out about the "vanishing" Irish pub, I've since ransacked my photo archives for more examples of old pub signs. Imagine my delight when I found this 74 with the barely-visible Joyce lurking on the outskirts. This picture dates back to when I was a number-hunting teetotaler and having a number peripheral to the rest of the picture was considered acceptable, the equivalent of having a single glass of wine along with the rest of the party. But now I'm back to my habits, all shame has flown out the window, and any excuse to talk about the Irish pub or Joyce will bulldoze any of the other 74s in my collection faster than you can say obsessive-compulsive.
A new book has just come out called A Pint of Plain: Tradition, Change, and the Fate of the Irish Pub. It's written by Bill Barich, a Yank like myself living in Dublin, which leads me to believe once more that the only people in the world who care about the "authentic Irish pub" are us silly, romantic Americans who were forced to watch The Quiet Man every year on St. Patrick's Day and lament why things aren't like the good old days that we were never around to witness in the first place. So be it. But I've got bigger fish to fry today. I'm not talking just about the pubs. I'm talking about typography.
A review of the book appears in this Sunday's New York Times Book Review, and I was further affirmed in many of my suspicions that whatever an authentic Irish pub may be, it's dying out. To be accurate, it's not dying out so much as being transmogrified into a poor-Guinness-pouring, overly commercialized, nostalgic monster with nightmare spawn in just about every continent. James Oliver Cury writes in his review of the book:

But as rural pubs are dying in the motherland, the concept has become a hot commodity around the world. The Dublin-based Irish Pub Company has built about 500 bars in 45 countries. Their advice: Add an "& Son" tag to make your place sound older. The multinational drinks conglomerate Diageo-Guinness sells Irish Pub Concept (I.P.C.) business plans. And statistics show that more stout is now sold in Nigeria than in Ireland.

Just as I suspected. Ye olde ampersand is being roundly pimped as a bona fide sign of authenticity and tradition, the typographical mark of the good old days when wakes were held in pubs and businesses were passed down in the family.
It's not that I have a serious vendetta with the idea of an "Irish Pub Concept" business plan. Let them build their little glossy paens to the old-fashioned past. (Mess with the quality of my Guinness, on the other hand, and you have a complaint coming.) Instead, let all of this eye-rolling awfulness allow us to appreciate those examples that do remain. There is a charm to the hand-painted sign with its three-dimensional shading, garish colors, and inconsistent spacing. Unless that's the next piece of advice in the Irish Pub Concept.: "Oh, and be sure to make your sign a bit wonky and paint your letters in 3 ugly shades." Sure I wouldn't put it past them.
Posted by Therese Cox at 12:00 AM

I walked the city street today with visions of your signs ringing in my ears.