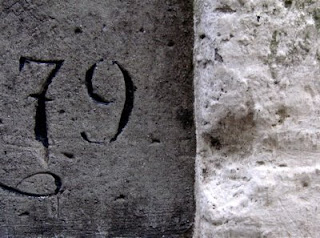 #79, Ringstrasse, Vienna
There's something irresistibly European about the 7 with a slash through it. It's rare to see it pop up on this side of the Atlantic and it usually appears only in handwriting to differentiate it from the handwritten 1. I had a brief phase some time ago where I gave the 7 a whirl in my own correspondence, just to see if it lent me that certain old school European je ne sais quoi. The gesture was enthusiastic but short-lived, the handwriting equivalent of dyeing my hair with Manic Panic, or like the three weeks where I decided to add the French accents over the "e"s in my name. Most of these re-inventions die out mercifully quickly. The slashed-seven, alas, does not routinely flow from my quill. But when I see one looking as good as this 79, I want to kick-start the pretension all over again.
But back to the EU. Taking the idea further, there's a striking stylistic similarity between the 7 and the euro symbol, officially adopted in 1997. It could be coincidence, but here's food for thought. According to the European Commission: 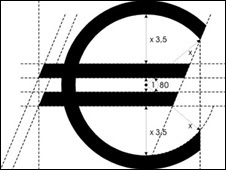 Inspiration for the € symbol itself came from the Greek epsilon (Є) – a reference to the cradle of European civilisation – and the first letter of the word Europe, crossed by two parallel lines to ‘certify’ the stability of the euro.


The creation fable is disputed - aren't they all? - by graphic designer Arthur Eisenmenger, who claims to have developed the symbol a quarter century before. Still, it's impossible not to admire the simplicity of the design as well as the consistency with not just the 7 but also other currencies. Beside the euro, the pound and the yen also use horizontal lines. (Though as a devotee of the "Blog" of "Unnecessary" Quotation Marks , I'm skeptical of the commission's claim that drawing = through the letter C will "certify" economic stability.) The quest for the ideal typographical icon is spreading to other countries and regions as well. Driven by money-grubbing motives Inspired by the elegance of the euro sign, designers are working right now to develop a currency symbol for the Indian rupee . Sharpen those pencils and break out the Moleskines, folks. The Indian government wants you.

But the question remains - and maybe my readers can help me out here - what is that little slash through the seven called? I found myself Googling all versions of "7," "squiggle," "slash," "typography" and consulted an article on the excellent I Love Typography site. Serifs, counters, ascenders, descenders, spines, stems, terminals and ligatures: there's a word for every part of a typeface. Everything, it seems, except the 7. If there are any typographer lurkers out there who can enlighten me, by all means. In the meantime, I'll open the question to my language lovers (you know who you are): if you had your druthers, what would you name the squiggle through the 7? I'm putting in my vote for the Euroslash. But hey, this is a democracy, right?
Posted by Therese Cox at 12:00 AM

I make my sevens this way! I also put that lovely little line across my Z's. I don't know when I adopted this habit, but I can't break myself of it. I distinctly recall attempting to make my 1's the way the French do, which is kind of like making an A without a crossbar, but it never looked right.

Back to the challenge of naming that squiggle-line, how about a "snick"? It's got elements of "snake," "snack," "snip," and "quick" all of which are evocative of the thing itself. It is also an archaic word meaning "to cut through" per Webster's dictionary.

nated - the condition of having a nickname bestowed upon you

Hi. I really enjoy your blog and decided to show my appreciation by presenting you with a Kreativ Blogger award. You can download the award from my blog Art of the City - see http://artofthecity.blogspot.com.
Thanks for sharing some great posts!

I like "snick", Ray. I also think "snig" might be appropriate as it maintains the "squiggle" sound while alluding to the other words you mention.

WV:
nessest- the act of resisting a nickname bestowed upon you.

Ray - "Snick" does have a nice ring to it. Plus, you threw in some etymology, which wins me over any day of the week. I like the thought of the "z" with a snick in it. (That's absurdly fun to say.)

SP - Thanks so much for reading and for the appreciation. I'm a fan of your blog now as well, so thanks for passing along the honor.

Jackie - dueling Word Verification words? I dig it. Though oddly, "snig" sounds derogatory. Maybe it's the term for a 7 with a poorly drawn line through it? "Aw man, that ain't nothin' but a snig."

Govt.of India , economic affair department ran a competetion to design a symbol for rupee like dollar have $ at its website
http://finmin.nic.in/the_ministry/dept_eco_affairs/currency_coinage/Comp_Design.pdf


here is my entery to the contest..
My simplest yet worthy “peace of art” for Indian Rupee Symbol link..

Back before the dawn of time when programmers coded instructions on sheets of crossed paper, Z was distinguished from 2 by the use of a snick.