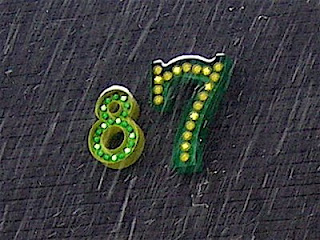 #87, Luquer Street, Brooklyn
On the edge of Red Hook, just beyond the point where the Prospect Expressway twists into Hamilton Avenue and not far from the Sunoco gas station with the flashing sign that misspells its own name, two bright, Vaudevillian beacons blink out a bright 87 in lights of green and yellow. The numbers are mismatched in size but perfect partners in crime plastered against the stark charcoal gray of their brick building. Driving late at night along the featureless expressway, one's eyes can't help but be diverted by the sight. It's as if a piece of Times Square fell off the delivery truck on the way to Manhattan. But as soon as you notice it – blink, and it's gone. I had noticed it before – usually late at night, usually on the way back from some band practice or gig – but it was some time before I ventured on foot to see the iconic numbers from street level.
Luquer Street in Brooklyn is a quiet 4-block street that stretches along the border of Carroll Gardens and Red Hook. As much as I always want to say it with a hard "Q" sound (as in "liquor", on which many of my decisions are based), residents pronounce it "Lu-QUEER". The always fruitful Forgotten New York ("Celebrating 10 Years of Forgotenning") launched a full investigation into the Luquer name based on the evidence of maps, including some dating back to 1866, that show the spelling as "Luqueer." Who knows why or when precisely the second "E" was dropped, though the correct spelling (based on the Luqueer family, who owned a good deal of Brooklyn's Twelfth Ward) is in fact with two "E"s.
This particular portrait was snapped during a snowstorm, one of several we've had here in New York this winter. Somehow the sight of this slightly gaudy, lovable 87 in the whitewashed scene brought me a feeling of great joy. Unlike some other neighbors I could mention who seem to shove their ugliness uniqueness down your throat, this 87 always strikes the right balance of blatantly bizarre and charmingly homespun. I hope you enjoy it as much as I do.
Posted by Therese Cox at 12:00 AM

Ha! "And so we blink on, lights against the traffic, looked at ceaselessly really fast."

That was a bit of a stretch.