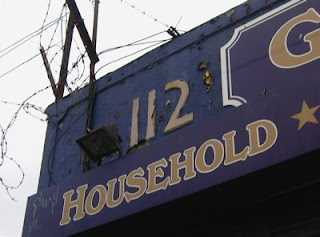 #112, East Wall, Dublin
There are many reasons to keep good notes while globe-trotting for cool numerals, and here is just one. It can be summed up in two cautionary words: satellite imagery.
Technology and I are reluctant bedfellows. I have slowly shed many of my Luddite ways over the years and tried to embrace the technology. Google Maps and its wicked step-sister program, Windows Live Search, have provided me with several fruitful minutes of satellite image browsing as well as valuable years hacked off my life expectancy as I, fuzzy-eyed and hopeful, scan blurry swathes of green, trying to locate the exact coordinates of the tin roof and back garden of the place I once lived in Ranelagh. Or suddenly it becomes vital that I view the old grain terminal in Red Hook from various enticing angles. It's not so much a slippery slope as the ultimate slurry pit. It's deep, it's mucky, and emerging from it with dignity is no easy task.
The trouble began in earnest because I couldn't quite place the street where I found this decaying 112. I knew it was the East Wall section of Dublin and I was fairly sure I could track it down with a simple 2-D map and a bit of legwork. So ensued a black hole of time in which I scoured RTE news clippings (my friend had told the story that there had been a shooting very close by in December on the Shemalier Road), birds-eye views of nearby roads, and my trusty photo archive. I soon realized the fruitlessness of trying to match coils of barbed wire in a photo I'd snapped with a picture taken from, well, outer space.
Undeterred, I found myself ensconced in another time warp. This one, however, caught me off guard. Quite near the section of map where I found the 112 (Church Road, for the record, as far as I can tell), I happened upon a patch of land that seemed utterly logic-defying in its insistence that every road in the vicinity was called by the same name.
Everywhere I looked in this patch of Dublin 3, it was nothing but water, the N1, and Alfie Byrne Road.
Now I realize I could simply have embraced the technology and been content to direct you to the Google map of the area in order to demonstrate the mind-boggling oddness of the arrangement. But Luddite ways die hard, and before my left hand knew what my right was doing, I was tracing over my computer screen, vertically, with a Pilot Precise pen and a sheet of paper from my printer tray, the white glow of pixels beaming beneath my manic hand and Alfie Byrnes flowing like ambrosia from my pen. I think you'll agree I may yet be called to the vocation of cartography. Or maybe I just need to cut down on my coffee intake. 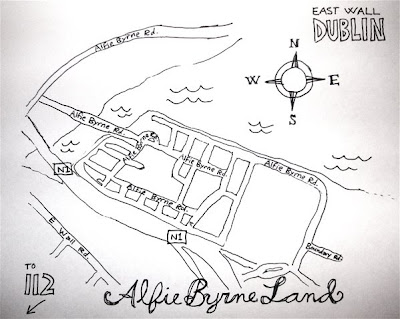 If the author had taken better notes on that cycling excursion, this catastrophe of cartography would never have happened.
Posted by Therese Cox at 12:00 AM

This Alfie feller seems a bit of an egotist. I can imagine him, hands smacking flat against the dinner table in anticipation of his ale and potatoes, contemplating, always contemplating his Great Road Plan while his wife sighed and nodded and yessed.

This post was so funny, T. Love, love the hand-drawn map.

If only you'd asked me Therese. I live in the flat above that sign! Could have saved you so much trouble.

Well, Jackie, he was a politician, so that might explain a lot. Though I very much like your picture of him w/ the ale and spuds. According to Wikipedia (my dignity as a professor prohibits me from ever uttering this phrase in public), he was known as the "shaking hand of Dublin". I think I get what they're after, but all I think is: dude had a bad case of the DT's.

Oh for f**k's sake, Flann. I didn't realize that by "embrace the technology" I could have simply "emailed the Begrudger". I hope I've done your home justice as I quite like it, barbed wire and all.

So did I get it right - Church Rd?

A politician, eh? Dude couda taken over the world.

He already has. You can see his face in watermark on the dollar bill, just above the freemason's pyramid.

As for the multiple Alfie Byrnes, this is probably due to the site you used being Google. I'd imagine half a dozen Alfie Byrne Roads is right enough for them. For the record, that area is East Point Business Park, and I don't know if the streets - sorry, _roads_ - even have individual names.

The other wonderful thing about that Google map is the presence of the N1 running through the heart of Marino. The N1 is underground there, in the form of the Port Tunnel, so the big yellow strip isn't visible on the surface at all.

Robt, yes, that's the one! I'm glad to have you confirm it as I can't tell you how earnestly I stared at those same pixels. Seriously, though. Live Search maps? Evil. Just evil.

My drawing was a peaceful protest against Google maps. Helpful at times, of course, but I sensed when I saw the Alfie monopoly that there was something amiss. And yeah, I don't remember cycling down the Port Tunnel.

Also, Robt - What's the distinction you make between a street and a road anyway? I tend to use them interchangeably...

You're asking a transport planner to answer that question in the comments of a blog? Oh mercy!

Had The Irish Times seen fit to publish my letter on the subject a couple of years ago, I'd just link to that, but alas. Anyway, at its simplest, I would say that on a road the traffic function takes precedence, but on a street traffic is (or should be) subordinate to other activity. Although, curiously, I would always say "I went down the road" even if talking about a street.

Haven't you ever noticed how few Roads there are in Dublin city centre? 'What's the most central Road in Dublin?' is a good pub quiz question (that once featured on Archiseek's own 'How Well...' thread).*

*Consider this question a spot of revenge for your number teasers!

F**k the Irish Times then. I'd link to your letter! But I like that as a basic working definition. Though I'm still trying to figure out that whole top/bottom of the road distinction (as in "the top of Grafton Street") or how you know when you're going up/down said road.

As for the puzzler - ARGH! My willpower may give out soon. You gonna give me a deadline and/or put me out of my misery anytime in the foreseeable future?

Ah no, I just wanted to make you wince, temporarily.

It's Memorial Road- back of the Custom House.

As for the top/bottom//up/down distinction, the simple rule of thumb is If you're going up a road, you're not going down it, and the top of a road is at the other end from the bottom. Easy when you know how! ;)

Thank you! - Memorial Road. Yes, the curvy one by the weird eternal flame.

I'd probably be better off reading Ulysses than trying to find my way around Dublin using all this info!