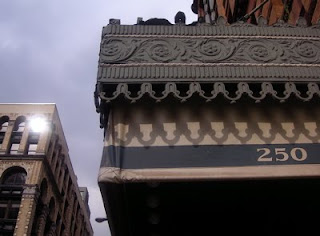 #250, Greenwich Village, NYC
Earlier this year, I was reading the paper in a musty hotel bar in Dublin when I got the news that Patrick McGoohan, the star of the 60's television show The Prisoner, had passed away. I've never been a big television watcher, but reruns of M*A*S*H and DVDs of The Prisoner are my two exceptions, so I was sad to hear of his passing.
The concept behind The Prisoner, for those of you who've never seen it, is vaguely Orwellian. "The Prisoner" in question, played by McGoohan, is a sports-car driving man-about-town who finds himself, after resigning from an undisclosed business/company/agency, subjected to poison gas by a man in a top hat in his flat in London. When he wakes up, he finds he's trapped in a creepily idyllic town known only as The Village. The dress code is mod meets French 60's films meets Disney: lots of primary colors, stripes, and capes. Instead of names, everyone is assigned a number. McGoohan, though he rails against it, is known in The Village as Number Six.
It's hard for me to say I'm going to Greenwich Village, AKA "The Village," without thinking of The Prisoner. Even as I type it, it's on my mind. And as I look at the backdrop to this 250, the bright spot of sunlight reflected here in a Mercer Street window transforms itself into the Rover, the giant white bubble that acts as border patrol for The Village. Try to escape, and the Rover will bump, roll, bounce, and track you down, then envelop you in its outer membrane. In other words, you're toast. Looks like I'll be stuck in The Village for awhile.
Posted by Therese Cox at 12:00 AM

Stopped by your blog today! MY goodness, you are an amazing photographer and the theme of this blog is genius.. Ill be back. Feel free to check out my blog. Lets follow each other.
www.poomasterpost.blogspot.com

I'm sure you'd enjoy a visit to 'the village', Portmeirion in Wales where the series was filmed. It's a very odd place, but fantastically situated.

We're swept up in memories of 60s-mod, spy TV!
Some of our favorites: The Avengers, during the Emma Peel years; The Man from U.N.C.L.E. with super agents Napoleon Solo and Illya Kuryakin; and we have to throw in the wacky Get Smart.
What a village of characters.

TPP - Thanks very much and welcome. I'll have to abbreviate your moniker, however, since I'm of a very delicate constitution.

Adam - I would LOVE a visit to Portmeirion. Have you ever been there? I keep wishing for a commission to go and write about the annual Prisoner conference. As it stands, I think I'll have to end up there as part of this bizarre 3-part Welsh pilgrimage I've been planning in my head for about a year. More about that later.

designslinger - Of course! Even reading those fabulous names is making me nostalgic. At least for their clothes and theme songs.

Good text, thankyou. Love the lacework above the 250