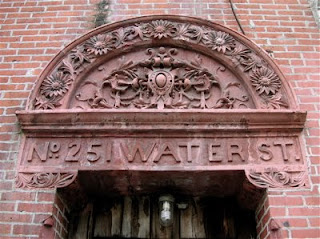 #251, South Street Seaport, NYC
Once, in a New York City not so long ago, the Fulton Fish Market actually resided on Fulton Street and the South Street Seaport smelled like a proper seaport. That area on the east side of Manhattan near the Brooklyn Bridge has been stripped of some of its character and sanitized over the years, but vestiges of the old character remain if you know where to look. This brick and terra cotta beauty on Water Street has been holding steady in the same location since it was built in 1888. The Italianate decoration above the door is decorative without being fussy, and the lettering above the door is both quirky and dignified. The uneven spaces between the letters bear the marks of being hand-crafted, and check out the reverse umlauts underneath the No.
One of my favorite books, my desert island book (especially if the desert in question is Manhattan), pays homage to the old Fulton Fish Market. It's called Up in the Old Hotel and it's by Joseph Mitchell, one of the most gifted reporters of the sights, sounds, smells, and characters that made up New York City around the middle of the last century. I know I just described Nabokov as having prose so good you could eat it with a spoon. Mitchell is what happens when you're scouring the very bottom of the newspaper that held your fish and chips, scooping up the salt and vinegar, hungry for more. Finger-lickin' good is what it is. But don't take my word for it. Have a taste:

Every now and then, seeking to rid my mind of thoughts of death and doom, I get up early and go down to Fulton Fish Market. I usually arrive around five-thirty, and take a walk through the two huge open-fronted market sheds, the Old Market and the New Market, whose fronts rest on South Street and whose backs rest on piles in the East River. At that time, a little while before the trading begins, the stands in the sheds are heaped high and spilling over with forty to sixty kinds of finfish and shellfish from the East Coast, the West Coast, the Gulf Coast, and half a dozen foreign countries. The smoky riverbank dawn, the racket the fishmongers make, the seaweedy smell, and the sight of this plentifulness always gives me a feeling of well-being, and sometimes they elate me. I wander among the stands for an hour or so. Then I go into a cheerful market restaurant named Sloppy Louie's and eat a big, inexpensive, invigorating breakfast -- a kippered herring and scrambled eggs, or a shad-roe omelet, or split sea scallops and bacon, or some other breakfast specialty of the place.

It's delicious. When I read the essays in this book, an old, would-be forgotten New York comes to full-bodied life. Never mind the fact I'd spit out a kippered herring if you plopped one on my plate. It's prose, dammit, so I can have all that I want.
The Fulton Fish Market still exists, only it's in the Bronx now. It moved there in 2005 and still functions. About a year ago, in honor of Joseph Mitchell's centenary, the New York Times ran a piece about "Up in the Old Hotel", the essay in the book of the same name that pays homage to all things fishy and seaporty. So you can imagine my delight at spotting, in the sidebar of the article, a black-and-white photograph of the author himself leaning in a doorway, looking dapper and attentive. The doorway? No. 251 Water Street. You can check it out here. Hungry for more? Get the book. Bring napkins.
Posted by Therese Cox at 12:00 AM

Interesting photo of old Mr Mitchell. I had the impression that the doorway was bigger from your photo, but here it just looks like a boarded up fire escape.

I see what you mean about the prose - "the smoky riverbank dawn" is just delicious!

You match his prose well.

We were in the old market area in Chicago the other day and snapped a pic of a great terra cotta panel on the side of an 1880s building that reads, Fulton Wholesale Market District. Were they copying New York???
And, we stumbled upon the original episode of "The Prisoner" last night while we were scrolling through our cable operator's DVR ONDemand channel!!! It was a total accident - had no idea it was there. There are 6 more to watch. Saw a promo for a "new" Prisoner AMC starts airing in a week.

If you were here, I'm sure we'd be quoting Prisoner zingers all day.

Adam - It's unreal how many doorways like this I see in New York: gorgeous on top; manky and boarded up below. Part of me wishes it was all better maintained, but I kinda have a soft spot in my heart for a touch of dereliction.

Once again your writing makes me long for some archetectural character. I live in bland land and need a fix. But I'm off to England for an extended stay this Saturday. I'm going to take a thousand pictures.

T- Mmmmmm. Yes. The prose IS delicious, lick-the-bottom-of-the-newspaper good. I like his idea of "plentifulness" a lot. So- seriously- when are we going to open an "edible prose & poetry" shop? Would pay the bills. Or it would not.

redobut-- an inappropriately used conjunction in a student paper

I'd make a terrible business owner, Jackie. But I could bake some serious literary delicacies: Camus cupcakes, for some reason, spring to mind.

Just remembered this: I went to a Bloomsday event a few years ago where they had paired it with Samuel Beckett's centenary. The cafe was serving, all day long, "Beckett banana bread."

Niceley done, T! I just requested the book from the NYPL.

I think we should celebrate with old- timey cocktails downtown!

If only we could kick all the frat boys out of McSorley's...

I have just read your angst-filled post for today (whatever no. that may be!).

It's all in the text. The rest is just the hook to hang it on.