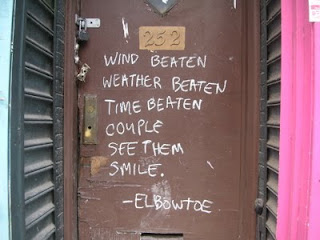 #252, Smith Street, Brooklyn
Call me civic-minded, call me Zen, but there's something about the transient nature of chalk graffiti that appeals to my sensibilities. I've written before about my enduring crush on Ellis G., the street artist who patrols the streets of Brooklyn at unknown hours, drawing beautiful chalk outlines around fire hydrants, street lamps, and bicycle wheels, giving the shadows of everyday objects an odd luminosity. But a few months ago, in a little alcove on Smith Street that was seemingly unloved and abandoned, I was intrigued when this (non-Ellis G.) message appeared on a doorway.
My head filled with questions: Who is the couple? Do they still live there or have they been evicted? Why has the wind and the weather beaten them so, and does that have anything to do with the dismal state of the buzzer? And, of course, the next obvious question that comes to mind: Who the heck is ELBOWTOE?
Street artists can be a notoriously canny lot. Some seek attention; others do their work on the sly. But this one, shall we say, toes the line between the two. So just for fun, I've compiled a list of little-known facts about the elusive Elbow-Toe, just in case you were wondering about the, er, face behind the rest of the anatomy.
1. Yes, the name was inspired by the ubiquitous Neck Face. Yes, he knows it's absurd.
2. By day, Elbow-Toe works as a senior programmer. He probably uses his real name.
3. He used the word "echelon" in an interview.
4. He works in other media: chalk, charcoal, paper, paste-ups, woodcuts, ink.
5. Elbow-Toe likes doorways and alcoves because of how they frame his work.
6. He does his art in Brooklyn mostly because he claims he's too lazy to go to Manhattan. (It happens.)
7. Elbow-Toe listens to Tom Waits and Captain Beefheart.
Hardly exhaustive, but we don't want to give away all the mystique, right? Till then, it's got me thinking of other possible monikers that might pepper the neighborhood walls and sidewalks someday. But between you and me, I don't think I'm ready for the wisdom of Waist Foot.
Posted by Therese Cox at 12:00 AM

Echelon in an interview. Been there, done that, asked to leave.

The great artists, Radge, they are always misunderstood.

"giving the shadows of everyday objects an odd luminosity."

I don't think ANY of us are ready for the scrawlings of Waist Foot. Or Ankle Chin. Though those would be entertaining identities to assume...

If I don't get to play Knuckle Brain, then I'm going home.

I, for one, am ready for Knee-Butt and/or Boob-Thigh to come along and take us all by storm.

The number, probably irrelevant now, is just so totally overwhelmed.