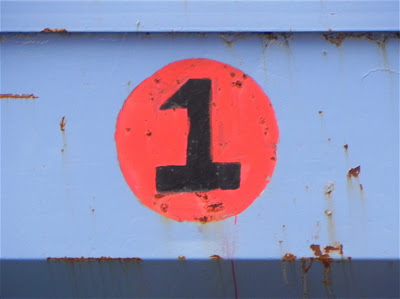 Galway, Ireland
Ah, nothing like a few of my favorite things to close out 2011: an Irish setting, some nice hand-painted handiwork, an eye-popping color contrast, scenic bits of flaking rust, and an unexpected location (front of a Galway Dumpster, anyone?). Oh yes, and in the title, a reference to an old war movie, which I'm amazed I don't manage to work in more often considering how much time I spend watching them. I might have to spend all of next year tracking down pictures of Steve McQueen and writing about the typography in the credits of The Great Escape to get my fix. But then, I wouldn't dream of doing that to you, loyal readers...
So here we are: the end of the number line. Another year, another 365 numbers. Though sometimes the constant deadlines drove me mental, it's been so much fun picking through my collection and sharing the best and the brightest of the bunch. I've enjoyed having so many readers drop by and visit, whether you comment or just have a look over your morning coffee. I knew #1 was going to have to be special in a year filled with so many of them scattered about -- it was totally worth paying that bill late just so I could have an excuse to write 11/11/11 on that check -- and I hope this one does the year justice.
Those of you who followed along in 2009 know that even after reaching a big milestone such as this, I'm not terribly good at remaining quiet. There were the Helvetica postcards, the homages to Dublin dereliction, and the "hey-look-at-me-I'm-posting-unthematic-things-and-it's-making-me-uneasy" apologias. You can expect -- if not more of the same -- more meanderings and stabs in the dark in the new year as I continue to make disturbances in the blogosphere. But in the meantime, I want to wish you all a very happy new year and to say thank you for making Ampersand Seven one of my favorite shared obsessions ever.
Posted by Therese Cox at 12:00 AM

And a Big Happy New Year to you, too!

Seconded, and hopefully see you in Dublin soon...

Here's a little Christmas present to go with one I threw into a comment a few weeks ago (don't know how to make it a link) - http://youtu.be/pWUferyKCww

VioletSky - Thanks for the good wishes and for following along! All the best to you in the new year.

Radge - Yes! I have a sneaking suspicion I will be back before long. Happy new year to you and yours.

Some Randomer - Thank you! I loved your old school Dublin drive links. But unfortunately, EMI has blocked this YouTube clip in the USA. I guess I'll have to go to Ireland again to see it... Sigh...

Please have a kind new year ahead - thanking you for the many memories of thinking about Ireland very much.

Happy New Year Therese. Thanks for the countdown.

Pierre - Thanks for following not just one but two countdowns! Always great to have you stop by and comment. A very happy 2012 to you, too.

athbhliain faoi mhaise, Therese. drop me a line if you're in our fair city any time soon.

A top finish Therese, and there you go mentioning film credits... which makes me think of Saul Bass's graphic genius which is going to send me off down yet another rabbit hole, thank you!

Rosie - Same to you, m'dear. Will definitely let you know next time I'm Dublin bound. In the meantime, I'll be visiting you in yonder blogworld.

Conan - Ahhh, Saul Bass AKA (to me) "the Vertigo guy!" Best wishes to you in the new year. It's been great having you stop by, and thanks for all the comments.

What's next? Hmmm. Never thought of that. Let me sleep on it.

"His name," said Aunt Kate, "was Parkinson. I heard him when he was in his prime and I think he had then the purest tenor voice that was ever put into a man's throat."

"Strange," said Mr Bartell D'Arcy. "I never even heard of him."

Robt - Of course! It wouldn't be a proper New Year's celebration without a festive reading of "The Dead." Happy Epiphany to you, too, and have a hot port for me till I am able to join you in dear dirty.... ah, you know that old cliche. ; )

Hope you are fine. Missing numbers. Please have a good new week ahead.

Therese, congratulations, I hear your novel is one of twenty being brought to market in March?

Robert - I kinda miss the numbers, too. Of course, for fun, you can always hit the archive randomizer for your very own number of the day.

Those lazy to see an excerpt here ya go! I flipping love ur writing T. ur so good! beautiful style ull be an author soon! hope ur happy
© 2012 Therese Cox. All rights reserved

For someone who was trying to get rid of Jane Doherty, Thomas Hopewell was spending an awful lot of time poking around the Most-Bombed Hotel in Europe looking for her. A brisk walk through the lobby and thorough investigation of the bar on the ground level and upstairs lounge revealed no sign of the girl and her tortoiseshell glasses and her book of Salvador Dalí, to his relief and disappointment. He’d been fearing another hotel ambush, and rather looking forward to it.

I photographed that same 1! Great to see it pop up here. Now if only I could remember how I got here. Hmmm. Oh well, it was worth the journey.